It has been said that De Tomaso's production models "range from merely handsome to downright stunning", and have been called "practical exotics"
​
Alejandro de Tomaso is truly an interesting personality. In the 1970's he continually made headline news as he bought and sold car factories in the same way a used car dealer buys and sells Chevrolets. He juggled several companies and continued to enlarge his empire from 1966 until 1976.

De Tomaso 505/38 is a Formula One racing car model, designed by Gian Paolo Dallara for Italian car-manufacturer De Tomaso and raced during the 1970 Formula One season by Frank Williams' F1 team.
De Tomaso was born July 10, 1928 in Buenos Aires and kept his Argentine citizenship even though he has lived in Europe for more than 35 years. His grandfather originally emigrated from the South of Italy. Alejandro's father was born in Argentina in 1894. He studied medicine and law. He was Minister of Agriculture and on his way to becoming President of Argentina when he died in 1933 at the early age of 39.

He participated in two Formula One World Championship Grands Prix, debuting on January 13, 1957. Despite his Formula One career, de Tomaso was much more significant in the motoring world as a maker of cars. He founded the Italian sports car company De Tomaso Automobili in 1959, and later built up a substantial business empire.
De Tomaso cars include the two-door, mid-engined Vallelunga, Mangusta and Pantera; the Deauville, a four-door saloon resembling the Jaguar XJ6; and the Longchamp, a two-door coupé version of the Deauville which later formed the basis of the Maserati Kyalami. 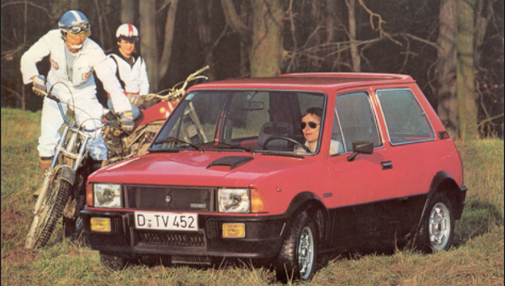 The Innocenti Mini is an automobile introduced by Innocenti in 1974. The vehicle was a rebodied, three-door hatchback version of the Mini, styled by Bertone.
During the 1960s and 1970s, de Tomaso acquired a number of Italian industrial holdings. As well as the Ghia and Vignale coachbuilding studios, he gained control of the Benelli and Moto Guzzi motorcycle firms, the Innocenti car company (founded as an offshoot of the British Motor Corporation to build Minis in Italy), and, in 1975, the celebrated sports car maker Maserati, which he rescued from bankruptcy with the assistance of the Italian government.

Over time, however, he sold many of his holdings; Ghia was sold to Ford, who would make much use of the name, in 1973; Innocenti and Maserati were sold to Fiat which subsequently closed the Innocenti brand in 1993. De Tomaso suffered a stroke in 1993, and the day-to-day running of the De Tomaso company passed to his son Santiago.
In 1993 De Tomaso's produced the Guarà, a two-door sports car with a carbon fiber body shell. The Guarà is based on the Maserati Barchetta Stradale prototype from 1991, a true race car from which a few conversions finally made it onto the public roads.

He helped in the engineering of the sports version of the fourth generation Daihatsu Charade, introduced in 1994, which was known as the Daihatsu Charade De Tomaso.
​
Alejandro de Tomaso died in Italy in 2003.

Fast forward to the spring of 2015 when is was revealed that the rights to the De Tomaso brand had been sold at auction. The storied Italian brand was sold to China's Consolidated Ideal TeamVenture, which picked up the company for just 1.05 million euros, or approximately $1.17 million.

A lawyer for the buyer announced that Ideal TeamVenture plans to produce cars in China bearing the De Tomaso name. The holding company is incorporated in the Virgin Islands but keeps a physical office in Hong Kong.