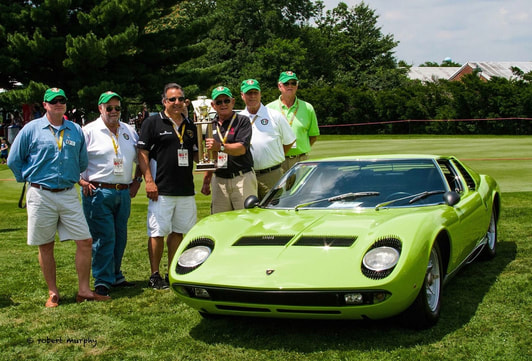 The Lamborghini Miura is a sports car that was produced by Italian automaker Lamborghini between 1966 and 1973. The car is widely considered to have instigated the trend of high performance, two-seater, mid-engined sports cars. When released, it was the fastest production road car available.

The Miura was originally conceived by Lamborghini's engineering team, who designed the car in their spare time against the wishes of company founder Ferruccio Lamborghini. He preferred powerful yet sedate grand touring cars, rather than the racecar-derived machines produced by local rival Ferrari.

The Miura's rolling chassis was presented at the 1965 Turin auto show, and the prototype P400 debuted at the 1966 Geneva show, to stellar receptions from showgoers and motoring press alike. Both were impressed by Marcello Gandini's sleek styling and the car's revolutionary mid-engine design.

As Lamborghini's flagship car, the Miura received periodic updates and remained in production until 1973, and was not replaced in the automaker's lineup until the Countach entered production in 1974.
The P400S Miura, also known as the Miura S, made its introduction at the Turin Motorshow in November 1968, where the original chassis had been introduced three years earlier. It was slightly revised from the P400, with the addition of power windows, bright chrome trim around external windows and headlights, new overhead inline console with new rocker switches, engine intake manifolds made 2 mm larger, different camshaft profiles, and notched trunk end panels (allowing for slightly more luggage space). Engine changes were reportedly good for an additional 20 PS (15 kW; 20 hp).
Other revisions were limited to creature comforts, such as a locking glovebox lid, a reversed position of the cigarette lighter and windshield wiper switch, and single release handles for front and rear body sections. Other interior improvements included the addition of power windows and optional air conditioning.. About 338 P400S Miura were produced between December 1968 and March 1971.

The Alfa Romeo Giulietta used unibody construction and a front-engine, rear-wheel-drive layout. Front suspension was by control arms, with coaxial coil springs and hydraulic dampers. At the rear there was a solid axle on coil springs and hydraulic dampers. The axle was located by a longitudinal link on each side, and by a wishbone-shaped arm linking the top of the aluminium differential housing to the chassis. All Giuliettas (save for the last SZ examples) had hydraulic drum brakes on all four corners. When leaving the Portello factory it originally fitted Pirelli Cinturato 155 HR15 tires

The 365 GT4 BB was updated as the BB 512 in 1976, resurrecting the name of the earlier Ferrari 512 racer. The name 512 referred to the car's 5 liter, 12 cylinder engine; a deviation from Ferrari's established practice of naming 12-cylinder road cars (as the 365 BB) after their cylinder displacement.

The engine was enlarged to 4943.04 cc, with an increased compression ratio of 9.2:1. Power was slightly down to 360 hp, while a dual plate clutch handled the added torque and eased the pedal effort. Dry sump lubrication prevented oil starvation in hard cornering. The chassis remained unaltered, but wider rear tires (in place of the 365's equally sized on all four corners) meant the rear track grew 63 mm.

The Bosch K-Jetronic CIS fuel injected BB 512i  introduced in 1981 was the last of the series. The fuel injected motor produced cleaner emissions and offered a better balance of performance and daily-driver temperament.  External differentiators from the BB 512 besides badging include a change to metric sized wheels and the Michelin TRX metric tire system, small white running lights in the nose, and red rear fog lamps outboard of the exhaust pipes in the rear valance.

In 1969 both Ferrari and Fiat introduced new 2.4-litre Dino models. The Fiat Dino 2400 premiered in October 1969 at the Turin Motor show; besides the larger engine, another notable improvements was independent rear suspension.

The V6 now put out 180 PS (132 kW; 178 hp), and used a cast iron instead of the previous magnesium alloy engine block; the same engine was installed on the Dino 246 GT, Ferrari's evolution of the 206. Whereas the original Dino was equipped with a rigid axle suspended by leaf springs and 4 shock absorbers, 2.4-litre cars used a coil-sprung independent rear suspension with 2 shockabsorbers derived from the Fiat 130. Rather than engine power and absolute speed, the most important consequence of the larger displacement was a marked increase in torque, available at lower engine speeds; the Dino 2400 had much better pickup, and it was found more usable, even in city traffic. Other modifications went on to improve the car's drivability and safety: larger diameter clutch, new dogleg ZF gearbox with revised gear ratios, wider section 205/70VR -14 tires, and up-sized brake discs and callipers. Cosmetic changes were comparatively minor.

​Both models were now badged "Dino 2400". On the coupé the previous silver honeycomb grille with the round Fiat logo on its centre had been replaced by a new black grille and a bonnet badge. A host of details were changed from chrome to matte black, namely part of the wheels, the vents on the front wings and the cabin ventilation outlets—the latter moved from next the side windows to the rear window. At the rear there were different tail lights. The spider also sported a new grille with two horizontal chrome bars, 5-bolts instead of knock-off wheels, as well as a new bumpers with rubber strips. Inside only the coupé received an entirely redesigned dashboard and new cloth seats, with optional leather seat upholstery; front seat headrests were standard on the coupé and optional on the spider

On testing it in 1967, Road & Track summed up the Fulvia as "a precision motorcar, an engineering tour de force". Named after Via Fulvia, roman road leading from Tortona to Torino.

The original Biturbo was a two-door, four-seater notchback coupé (of somewhat smaller dimensions than the BMW 3 Series of the time) featuring, as the name implies, a two-litre V6 engine with two turbochargers and a luxurious interior. The car was designed by Pierangelo Andreani, Chief of Centro Stile Maserati up to 1981, somewhat influenced by the design of the recent Quattroporte III (Italdesign Giugiaro).

When Alejandro de Tomaso acquired Maserati in 1976, he had ambitious plans for the marque. His plan was to combine the prestige of the Maserati brand with a sports car that would be more affordable than the earlier high-priced models that had traditionally made up the Maserati range. In fact, Maserati ceased making supercars like the ones developed under Citroën ownership altogether, like the Bora and Khamsin.

The Biturbo was initially a strong seller and brought Italian prestige to a wide audience, with sales of about 40,000 units. Sales figures fell in subsequent years. De Tomaso also used another of his companies, Innocenti, to produce Biturbo body panels and also to provide final assembly of Biturbos. De Tomaso later sold Maserati to Fiat, who grouped the company with their erstwhile rival Ferrari.

Built on the Fiat 1500 platform, the 1500 GT Ghia had a 1.5L straight four. The engine was not very advanced, but a compression ratio of 8.8:1 and the use of Weber carburetion kept it peppy. A 4.1:1 rear end ratio also aided acceleration.

​​Top speed was over 100mph, thanks to an aerodynamic shape and light weight. The vehicle used monocoque construction, impressive for what was essentially a coachbuilt car. Suspension was typical, with an independent front end with coil springs and a live rear axle with leaf springs.

Some performance figures of the 1500 GT Ghia are disputed. Horsepower figures range from 67bhp to 84bhp (though it is agreed that peak power was reached at 5,200rpm). The cars were built by Ghia, making reliable information harder to come by than it would be had the cars been built instead by Fiat. For this reason, official production numbers have been a cause of argument for many years. Lately, Ghia itself sent out a letter declaring that they had built 846 cars. Though this didn't quell arguments entirely, it is now agreed by many that the actual production run totaled 846 units. About 36 cars were officially brought to the U.S. by the Krim Car Import Company of Detroit.

As with most Italian cars with the name of a famous design house in their title, the 1500 GT Ghia's most valuable asset was its styling. The design was unique and well-suited to the car's small size. From the rear ¾ view, just a hint of Alfa Sprint Speciale could be seen where the trailing curve of the rear fender meets the truncated Kamm tail. The fastback roofline ducked very low to meet the car's tail, aiding the design's balance by finishing off at the same height as the front grille. The Borrani wheels looked clean with a design using slots that matched the two vents on either front fender. Hidden door handles kept the look clean and smooth. The bumpers, which were flawlessly integrated, contributed the same effect. The rear bumper met the curvature of the car as to not detract from the rest of the design, and the front bumper was cleverly disguised as a chromed grille surround.

We would like to extend a special thank you to Pittsburgh based Dan Vaughan from ConceptCarz for providing some of the specific details and history on several of the award winners.