Giovanni Moretti made his name with racing engines for motorcycles. Following World War II, he began making small automobiles, the first powered by his own vertical twin-cylinder engine. In 1950, he developed a four-cylinder overhead cam engine, in both 600 and 750 cc sizes. Built on a backbone chassis, it was a lively package and available in several body styles.
Register now

Moretti Motor Company is a now defunct automobile manufacturer formerly based in Italy. It was founded in 1925 and ceased operations in 1989. Today, many of its sportscar models can still be found at various European auto shows but not often in North Ameica. Moretti Motors produced a variety of models at various times including motorcycles, microcars, and several commercial vehicles.
The first conventional car model released by Moretti Motors was the 'Cita'. Shortly afterwards Moretti came out with the '600'. Then, in 1953, the '750' was released. Various versions of the '750' were built during the 1950s including estates, taxis, berlinas, coupes, single seat racing cars and commercial vehicles. Some competitive success was achieved in the 1950s with the 600 and 750 models.
Special-bodied Fiats
A major shift in Moretti Motors' operations came in the latter part of the 1950s when they ceased designing and building complete cars. In an effort to reduce costs and overhead, the company switched to using Fiat mechanicals and chassis for all of its conventional automobiles. Despite offering a full range of model versions based on the '750' (saloon, coupé, spider, estate and more) though, Moretti was still unable to compete with Fiat's 600, which cost almost half the price and consequently dominated much of the marketplace. Mass production of all models were subsequently slashed due to continued low sales and financial struggles. However, thanks to the friendship between Giovanni Moretti and Gianni Agnelli, Moretti Motors was able to strike a favorable angreement with Fiat to continue using the Fiat chassis for a series of special/low volume models. Sporty-looking coupés with very similar bodywork utilizing 127, 128, 124, and 132 underpinnings were built in the late sixties and early seventies.

In 1979 the Fiat Campagnola-based Moretti Sporting appeared, with a 2.5 liter diesel engine. The very luxurious "127 Vip" and "Ritmo Gold" arrived in 1980. The Panda Rock, which was presented in 1983, was a roofless and rollbar-equipped Panda 4x4 intended for off-roading purposes. A "Midimaxi III serie" was also presented in 1983, based on the most recent version of the 127. In a continuing effort to occupy ever narrower niches left vacant by Fiat themselves, Moretti also offered panel van ("Furgonetta") versions of the Uno and Panda 4x4.

Later, as production continued to fall, Moretti turned to producing personalised conversions of various Fiats such as the Uno, Panda and Regata. 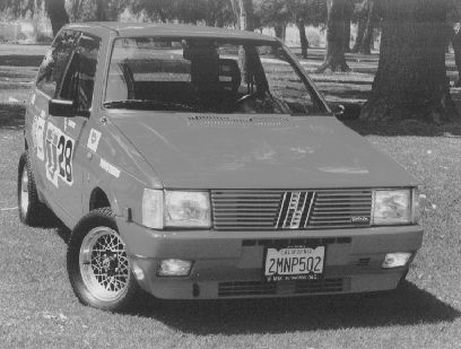 1989 Ital Uno Turbo
At the 1983 Bologna Motor Show a "cabriolet" version of the Fiat Uno was presented. It was actually a cabrio coach rather than a full convertible, retaining the door rails and rear side windows. Equipped with series engines (including a diesel option), it was sold directly through select Fiat dealers in Italy.

In 1989 Moretti produced the "Ital Uno Turbo" which was imported in limited numbers to USA by M.I.K Automotive in North Hollywood, California. The car was based on the Fiat Uno Turbo with a 1.3 L turbo engine and with anti-skid braking system, the car was also fitted with TOYO 13" tires.