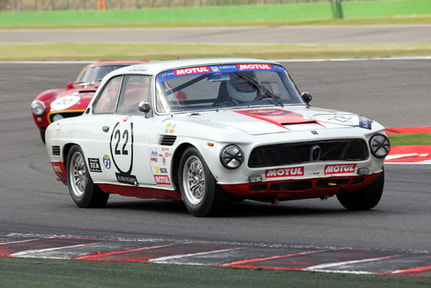 Iso Rivolta, that racing four passenger. Photo courtesy VeloceToday.
Iso Rivolta was an automobile and motorbike manufacturer in Italy, predominantly active from the late 1940s through the early 1970s. They are known for the iconic Isetta bubble car of the 1950s, and for a number of powerful performance cars in the '60s and early '70s.

Iso Rivolta was initially named 'Isothermos and manufactured refrigeration units before World War II. The company was originally founded in Genoa in 1939, but was transferred to Bresso in 1942 by Renzo Rivolta, an engineer and the heir of industrialists.

The business was refounded as Iso Autoveicoli S.p.A. in 1953 to reflect the production of motorized transport. Renzo Rivolta died in 1966, and his son, Piero, took over as managing director.

At the start of 1973 the Rivolta family ceded the business to an Italian American financier named Ivo Pera who promised to bring American management know-how to the firm which proved to be it's demise.   Two prototypes were shown in the 1990s, however, neither reached production.

The Rivolta family has been involved in scooters, motorcycles, sports cars, grand touring cars, as well as yachts and the automotive design house Carrozzeria Zagato.
Renzo Rivolta had recognized a unique opportunity and jumped in front of his competitors by making performance transportation a priority in the post-war economy.

​New scooters  where introduced at a rampant pace with the 'Furetto' in 1948, the 'Isoscooter' in 1950, the 'Isocarro' in 1951', the 'Isosport' in 1953 and finally the 'Isomoto' in 1954. The last Iso motorcycle was presented as the Iso 500 in 1961. Isomotos were known as expensive, very durable and very well-built.  The twin piston engine developed at Iso had more power than the comparable Vespa and Lambretta models making the Iso's the performance choice in the post-war economy. ​​

​THE BIRTH OF THE AUTO SCOOTER: THE ISETTA

​As the economy began to expand in the early 1950's consumers in Italy wanted to travel to places without getting  soaking wet on the back of a scooter and once again sitting down comfortably  inside a car.
Figures vary, but there where only about 600 - 800 Iso Isetta's produced under the Iso name.  Less than 100 are believed to exist in the world today.  The Isetta caused a sensation when it was introduced to the motoring press in Turin in November 1953. However, soon after the Isetta was introduced, Fiat introduced the Fiat 500, at a similar price point, and it could seat four people.  Rivolta and the team at Iso had gambled the company's  success on the Isetta's, but soon they where  sitting in the lot at the Bresso factory, unsold.

In 1947, BMW was granted permission to resume motorcycle production. Its first post-war motorcycle was released in 1948. In 1952 BMW resumed production of automobiles, with the BMW 501 large sedan. Unfortunately consumers did not want or could not afford large sedans and BMW was facing some some financial woes that could mean the end to the company as well.

​They approached Rivolta and proposed buy-in the entire assembly line and moving it to Germany under license.  The assembly line was moved from Bresso to Munich, the engine was upgrade to 250cc and the braking system improved.  Over 160,000 Isetta's where produced and the royalties that Rivolta received on each sale funded the next development which would place the name ISO in the annuls of Italian motoring legend. Many credit the Isetta with keeping the BMW out of bankruptcy through 1959 -1960.

​THE RIVOLTA -BIZZARRINI RELATIONSHIP: BIRTH OF THE ISO GRIFO

Together with engineer Giotto Bizzarrini, designer Giorgetto Giugiaro and chassis builder Bertone, Renzo Rivolta began developing the Iso Rivolta IR 300, which was first presented at the Torino Show of 1962. It was an elegant 2 + 2 Coupéwith well-balanced technical components and outstanding driving performance
Iso Rivolta's most well-known Gran Turismo automobile was the Iso Grifo which featured a low-slung, sporty berlinetta body by Bertone. After Bizzarrini left the project, this prototype formed the basis for his own Bizzarini 5300 GT. The Grifo Prototype was further refined by Iso, receiving a reworked, less aggressive and more luxurious body in the process, and went into production in 1965.
After the sudden death at Milan on 20 August 1966 of Renzo Rivolta, his son Piero became the director of Iso Rivolta, aged only 25 then. Under Piero's leadership, Iso built the limousine Fidia, "the fastest four seats on wheels" (Advertisement, 1967) with body by Ghia, the Grifo 7 litri (with the GM V8 7 L marine engine) and the 2 + 2 fastback Coupé Lele (1969) with body designed by Bertone, intended as the successor to the IR 300. Iso Rivolta went bankrupt in 1974, only 1700 Iso Gran Turismos had been built in those ten years.
Page Last Edit: 17 November 2017