Zagato's cars advanced designs are synonymous with light weight and excellent aerodynamics.
Ugo Zagato was born in June of 1890. When he was old enough, he began working for Varesina which was located in Germany at the time. His career later led him into the evolving aircraft industry for a period of time. He later opened his own coachbuilding company in 1919.

The company was located in Milan and specialized in light-weight metal construction; much of the techniques had been learned while working in the aircraft industry. The company quickly grew a reputation for creating aerodynamic, lightweight, competitive sporty automobiles. Alfa Romeo realized their potential and tasked Zagato to outfit their automobiles, such as the Alfa Romeo 6C1500 and 6C1750 race cars. The first Alfa Romeo bodied by Zagato was the Alfa Romeo G1 in 1921. 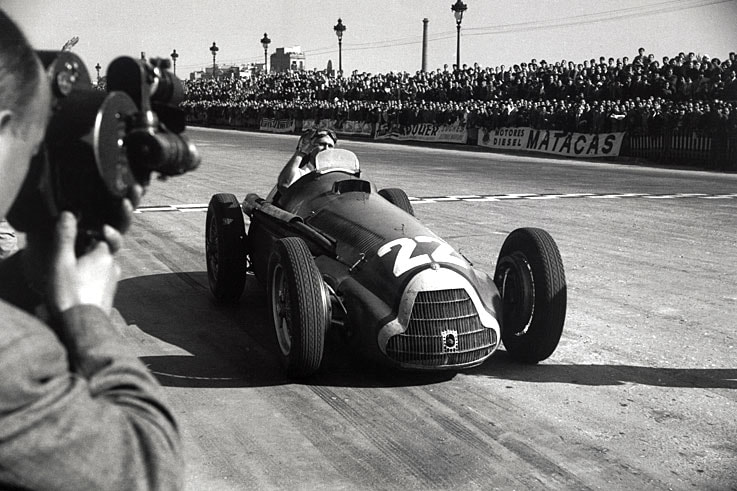 Juan Manuel Fangio wins the first of his five Formula 1 world titles in his 1951 Alfa Romeo 159 Zagato
The relationship between Alfa Romeo and Zagato continued through the mid 1930's with most of Zagato's work being provided by Alfa Romeo. Other work was done for Italian marquees such as Lancia and Fiat and later, by Ferrari. In 1922, Zagato bodied the Fiat 501.

During World War II, Zagato's facilities were destroyed. After the war, the facilities were reconstructed, this time located north of Milan. The relationship with Alfa Romeo continued. In 1951 a Zagato bodied Alfa Romeo 159 captured the Grand Prix World Championship.

Ugo Zagato's two sons, Gianni and Elio, began working for the company during the 1950's. When Ugo died in 1968, they took over the business and a new factory was constructed.

Zagato is a modern design consultancy and engineering services company situated just outside Milan, the hub of Italy's world-famous fashion industry. The company's premises occupy an area of 23,000 square metres, of which 11,000 square metres are covered.

After the Second World War, a new racing category took off - the GT class. A pioneering privateer racing scene quickly established itself, and Zagato was the marque that became its representative, with cars that were great on the road and, come Sunday, were unbeatable on the track.
Zagato's styling is individual, but has never been influenced by fashions of the moment.
CORPORATE STRUCTURE
Zagato is currently headed by Andrea Zagato, the third generation Zagato. Under the joint management of Andrea and his wife Marella Rivolta-Zagato, the corporate structure has undergone radical restructuring, and considerable resources have been invested in the most advanced computer-aided design and prototyping tools.

The resources involved in each project during the different phases of the development are exactly those that it asks for, in terms of skill and know how.

Each project is lead by a 'project manager' individuated inside the division which appears to be more involved in the specific project.

​For the gamer's out there who have competed on Sony’s "Gran Turismo Sport", you may recognize the IsoRivolta Gran Turismo that showed up in reality at the Tokyo Motor Show last month.  That "pagoda style" scoop bonnet that  features the iconic Rivolta Grifo, is a nice throwback to the Iso Grifo 7 Litri.

Zagato announced that it will build between three and five of them for actual customers.

“The IsoRivolta Vision Gran Turismo was created to drive in the virtual-reality world, a world created by Gran Turismo. There is no mass in the virtual-reality world, as it remains a place that exists only in our imagination... Like a Mobius strip, the PlayStation game has allowed ourselves to be transported from reality and thrust into a world of pure fantasy, and then back again. The body style of the IsoRivolta Vision contradicts the sense of oneness that has evolved over the past hundred years of automotive design... Our next wish is that this car, which was born in Gran Turismo, will take to the road in real life and one day grow larger in your rear view mirror, eventually passing you at high speed. When this happens, you will feel the limits of your imagination being severely tested, blurring reality.”
~Norihiko Harada, VP of Design at Zagato
Page Last Edit: 13 November 2017