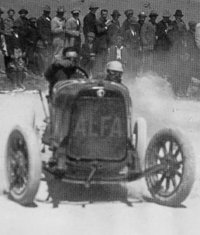 Alfa Romeo has competed successfully in Grand Prix motor racing, Formula One, sportscar racing, touring car racing, and rallies. It has competed both as a constructor and an engine supplier, via works entries (usually under the name Alfa Corse or Autodelta), and private entries.

​The first racing car was made in 1913, three years after the foundation of the company, and Alfa Romeo won the inaugural world championship for Grand Prix cars in 1925.

​The company gained a good name in motorsport, which gave a sporty image to the whole marque. Enzo Ferrari founded the Scuderia Ferrari racing team in 1929 as an Alfa Romeo racing team, before becoming independent in 1939. It holds the world's title of the most wins of any marque in the world.
REGISTER NOW

According to Automobilismo Storico Alfa Romeo:
"Alfa Romeo has one of the most ancient and historical emblem among all car brands in the world. This emblem was born on 1910, a few months after the Anonima Lombarda Fabbrica Automobili (ALFA) foundation, on June 24th 1910.

On the left: the red cross on white field is the symbol of Milan, the hometown of Alfa Romeo.

On the right: the symbol of one of the most important families in the history of Milan (and Italy), the Visconti family – the family that ruled Milan. There are a lot of legends about the origins of this heraldic symbol, representing a mythological animal with a human in his mouth (some believe it to be a dragon, but most likely a snake).

​During the time of the crusades, Otone Visconti , the founder of Visconti Family and a knight, fought against a noble Saracen knight (nomad from the Syrian Desert that bordered the Roman Empire). Otone beat the Saracen knight and, following the tradition, took the symbols the Saracen carried on his shield: a snake with a human in his mouth. At first glance, it looks like the snake is eating the human. Instead, the human is coming out of the snake a "new man," purified and renewed.
​
The meaning: The snake is a circular animal (a snake can assume a circular position) and is an animal of the changing – able to change his skin regularly and totally renew or rebirth himself.
Last Update to this page:  4 May 2017