Each year the Cortile selects a marque or model to highlight for the annual event based upon factors such as
historical significance, unique local interest, brand resurgence, etc.

History
The Proiettore Macchina concept was introduced in 2010, second year of the Cortile.
Proiettore, in Italian, is the word for headlight. "Headlight" which encapsulates our goal for Proiettore Macchina.
We want to "shine a spotlight" for Pittsburgh Vintage Grand Prix attendees to unique and not-often-seen marques that have a rich and vibrant design and/or racing history.
Register Now 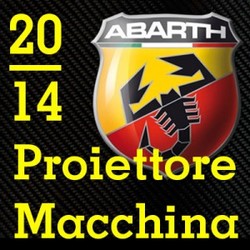 The Fiat Abarth has been selected as our 2014 Proiettore Macchina.  The Abarth Race Drivers who visit the PVGP each year have been some of the most supportive of sharing their impeccable race cars wit the public on Saturdays's at the Cortile, so, in conduction with the race driver's, we're holding a bit of an Abarth Race reunion in 2014.

The name comes from Karl Abarth, who made a business of turning small cars into big performers and, later, a line of snarly, go-fast exhaust systems you could buy from catalogs.

Americans tend to pronounce the name "AY-barth," but Fiat says the correct pronunciation is "AH-bart," finishing with your tongue on the roof of your mouth as if interrupted before you could say the "h."

ABARTH is much more than just a passion for cars, it is a real philosophy of life.
Established in 1949, the brand has a strong heritage and produced many legendary models.

Power in its purest form, together with sportiness and performance, and inimitable Italian design. These are the values that make Abarth the emblem of the most authentic racing spirit. A philosophy that is first and foremost a passion, and can be seen in every model in the catalogue: from the aggression of the road cars to the sheer power of the official competition cars, by way of a range of exclusive Limited Edition models.
Karl Abarth was born on the 15th of November 1908, in Austria, and since then something in the world of racing has changed. In 1928, Karl Abarth, who at the time was very young and worked at the Moto Thun factory as a mechanic, rode a motorbike to replace an injured rider on the occasion of the qualification for the Austrian Motorcycle Grand Pix and got the best time twice, ahead of the best riders of that time.
On the day of the race, Karl Abrath noticed that his motorbike had been sabotaged and decided to bring his cooperation with Moto Thun to an end. His punchy and fearless spirit enabled him to make the frame of a motorbike on his own, with which he took part in numerous races, wining all of them; unfortunately a bad accident marked the end of his motorbike racing. So Karl Abarth shifted from two-wheels to sidecars; Indeed he embarked on a seemingly impossible mission: challenging and defeating the orient Express on the 1,372 km stretch between Ostend and Paris.

During the Second World War, Karl Abarth moved to Italy obtaining citizenship in exchange of his sporting victories. He devoted himself to car engines and after an intense and invaluable period at Cisitalia, in 1949 he founded ABARTH & CO. in partnership with Angelo Scagliarini, father of Guido, the driver who would then join the CARLO ABARTH racing team together with the best drivers of that time, such as Vignale, Romano and of course the legendary Tazio Nuvolari.

Under the sign of the Scorpion, both the company emblem and Karl's star sign, the team won everything possible.

In the 50s the first contacts with major companies were established: Fiat, Ferrari and Alfa Romeo; yet the real turning point was the birth of the small FIat 600, the car that marked the mass motorization in Italy, the car of popular tourism. It was while working on this car that Abarth obtained one of his masterpieces: the 750.

The car became an incredible sport and commercial success; it was the car of young people, of speed-over, it was a small and accessible car that was fun to drive due to its sporty handling. It was the real democratization of racing cars. This small muscle car became famous all over the world and Abarth Scorpion became a real legend.

During those years Karl Abarth's fame reached its peak, also because he started to manufacture top cars working on the mechanical basis of small production cars. Moreover, this period saw the beginning of his cooperation with Pininfarina, which would make history in the world of cars.

The year 1959 saw the birth of the Fiat 500 and the successes obtained enabled Abarth to attract the interest of Fiat, which started to reward his small company for each win achieved in official races. Of course victories were numerous and the word Abarth entered everyday languages as a synonym for performance, modification, upgrading and winning spirit.

The successes achieved during the 70s were the last victories that Karl Abarth was able to enjoy. The death of its founder marked the end of an era, but the legend of the Scorpion is still alive. The Scorpion brand keeping its founder's philosophy, punch and passion.